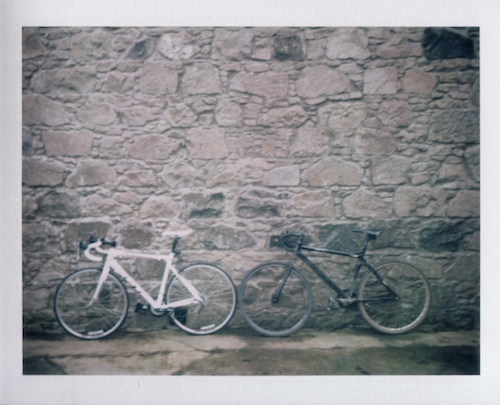 I’ll use this test shot (Yay, rollers haven’t got stuck open) to mostly waffle on about my new bike (not that you can really see or tell from this photo; it’s the one on the left).

I’m sure I’ve mentioned this elsewhere, but I’ll do a brief (Fuck it, it’s MY website, I’ll do what I want) recap:

So, yes, hurray! I went for the road bike. It is an “entry level” road bike - apparently - but, fuck, I’ve been riding one gear (fixed), having 16 gears (instead of 18, 20) is already more than I know what to do with. I still have some concerns over maintenance costs, but well, I can’t be expected to run things as lean as I have been doing forever. And I will work on getting the fixed gear fixed up for winter (it’s only when you get a new bike that you realise that is what a bike is meant to feel like and just how knackered the old one is).

A couple of interesting things about riding a bike with gears and a freewheel after two and a half years of riding nothing but fixed gear: