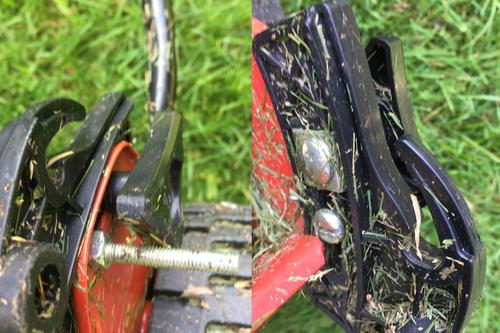 The cheap and crappy (but mostly robust) electric lawnmower I got from B&Q finally gave up the ghost. I have no compliants (well, apart from that it was crap) as I think I spent less than £40 on it, it’s lasted about nine years and been fairly abused during that time. We have a petrol lawnmower, but that is also pretty broken from being abused to cut fields (yes fields) and plus it needs petrol. So I decided to get a push lawnmower for about the same price as the cheapest electric lawnmower because there would be no more hassle of cables and no more running out of petrol; Cables are actually a big hassle - we don’t really have an outside power point so it means threading cables through windows either end of the house and plugging and unplugging to go around concrete washing line posts. I got a Einhill GC-HM 30 Manual Push Lawnmower. Unfortunately as it is it’s simply not fit for purpose, but can be fixed quickly and simply with a couple of bolts.

It relies on a plastic roller to set the cutting height and it has to impart a force on this - there is no way around this (unless you are mowing the most gentle of lawns - that doesn’t need mowing). The two screw stops and plastic adjusters are just not enough to hold things in place and no matter how much you tighten them the leverage will be too great (on a single point) and the roller will twist and the plastic shoulders start to deform. All you need to do to fix this is pick one cutting height “to rule them all” and use a couple of bolts to lock it out.

It’s simple mechanics. Imagine trying to hold a stick between thumb and forefinger and stop someone from rotating the end of the stick - doesn’t really matter how hard you grip it’s going to rotate. Now hold the stick with thumb and forefinger of both hands, a bit apart - much more resistance. So that’s all I did per the photo. Using shorter bolts with some washers onto the plastic would have been better, but I literally just used what I had lying about (not even matching either side). It works great since doing that; The 40 version might not suffer from this as it doesn’t have the crappy “infinite” adjustment although I’ve not seen on in real life to confirm.

We’ll see how it goes. I doubt it’ll last as long as the crappy electric one did, but maybe.

Well, it’s most definitely “push” so why not blog about a lawnmower?