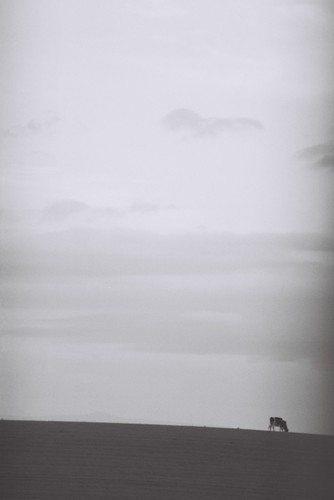 Including this, not because it is a particularly great photo, but, because of the fun and games involved in taking it: I set my tripod up in our bedroom with the biggest zoom lens I have (not that big) and used a cable release because I only had a slow film and couldn’t use that fast a shutter speed. I’m impressed that it came out so sharp all things considered. I took four shots, I can’t recall why; Three of them showed significant curtain drag, which seems to plague this camera sporadically when used in portrait mode, so I’m glad for this one that came out ok.

That and it’s fun to watch cows and quite lucky/difficult to capture the moment when one of the herd in the field remains on the horizon when all the others have moved behind it.