As per my headset post I wanted to write something about my change to cyclocross tyres due to my change in job and corresponding change in commute. But then time had quickly passed so I decided to wait until I’d clocked one thousand miles and then write a review. And then that time had quickly passed. But I’ve decided I’m still going to write it anyway because I’d made sure to take some photos at that point in time to document the wear rate.

Interestingly, it was my plan a couple of years ago to switch to a wider tyre. Only took three and three-quarter years to put that plan into action! In all fairness though, it would have REALLY been taking the biscuit to expect me to carry on with my skinny slicks given the change in riding surface; Although, actually, the change only happened because of a kind financial contribution from colleagues as a leaving gift from the old role, so suddenly I don’t feel that great about this; I guess the real test will be whether I can purchase the next set in a timely manner; I’m not that far off the two thousand mile mark now and I suspect that will be the limit for the rear at least which is a higher wear rate than I’m used to, but I don’t think that is the tyre, rather the coarse, gravelly surface.

I’d done the first two weeks of my new commute on my 23c slicks, but kept the offroad portion to a minimum and to the best surfaced area of the track. Also the weather was good so the track surface was dry and hard. I’d planned on getting the Schwalbe CX Comp as a cheap, slick-ish tyre, that would give me a bit of grip cornering (I’d had one near slip on the slicks and that was cornering on sandy gravel), but wouldn’t be too sluggish on the road since since I was still going to be doing some miles on the road to get to and from the offroad bits. When it came to it though the place I had a voucher for was sold out in the narrower width and 35c doesn’t leave much wiggle room on the rear so I went for the Schwalbe CX Pro instead in the 30c size (perfect!) which are actually a bit lighter. I was initially not keen on all those knobbles and thought them overkill, but then we ended up having a very wet August and I’m so glad I had these tyres as the surface changed completely - I really wouldn’t have coped on slicks, not even on the “good” stretch of the path.

I’m now pretty confident these will be my three season tyre (whilst this commute remains) with my studded tyres for winter. They aren’t even half as sluggish on the road as I thought they’d be: I can only go so fast on fixed gear anyway so moving from 23c Rubinos to these isn’t massively affecting me. I’m pretty sure this is thanks largely to the light weight of the CX Pros: They are only 95g heavier than the Rubinos and I can still climb the steepest hill I have to on them so the extra moment of inertia is not too noticeable unlike my very heavier winter tyres. It is possible to get even lighter CX tyres. There is folding version of the CX Pro that knocks another 50g off and then there are tyres like the Kenda Small Block 8s that come in at just 10g over the Rubinos I used, but the problem with both of these are that they are over a tenner more expensive than the cheapest wire bead CX Pro I can find and, well, that’s just dreaming.

I’ve had a bit of fun and games with tyre pressures. This is due mainly to a bad batch of inner tubes, but also due to the lack of a pump with a pressure gauge; I’ve always got away with it with road tyres as I can pump them as hard as I possibly can safe in the knowledge there is no way I can over inflate them with my crappy hand pump. For the inner tubes I got the cheapest I possible could (no surprise) in a 25-32 size which I thought would easily be ok as the tyres were only 30c. However, they were barely any bigger than my normal road inner tubes so I burst the first one just pumping up my rear tyre and then thought I’d better be careful not to over inflate the second one only to pinch flat on that a few days later on some of the more rocky ground. A pressure gauge would have helped. The third one of the set I’d bought was in the front tyre and mysteriously completely flatted a few weeks later. There was a tiny pin prick hole visible, but the tyre would hold no air whatsoever so it must have failed somewhere else as well. I made no attempt to find out where or fix it though, I decided I’d just have to buy some better inner tubes instead. As well as buying a more reputable brand I also bought the biggest I could (35-45) so the inner tube would be oversized and not stretched as thin when pumped up.

I also decided I’d splash out on £1.50 for a Schrader/Presta adaptor (I thought £12 on a track pump in the sale was a bit too extravagant) so I could try it and see how successfully it worked with the car foot pump, which does have a pressure gauge; At the very least I thought I could use it as a gauge, even if I had to resort to the hand pump for actual inflation. I’m impressed though, these little adaptors do work. The tyres have a 55 psi min pressure recommendation so I pump them to 60 psi and by the end of the week they are showing up as just over 50 (the gauge may not be mega-accurate as that seems like quite a drop, but then again I am putting the miles in and the tyres do get a hell of a pounding). On that note, the 55 psi minimum means that this isn’t really a proper CX tyre, but it is good enough for me. Anyway, a proper CX’er would be using tubular or tubeless which makes absolutely no sense for commuting. Oh, and also, I haven’t bothered with any of the oppositional direction of treads stuff and I’ve just mounted the rear in the same direction as the front; I really can’t see me needing the extra grip it supposedly provides, but I could do with any marginal benefits from less rolling resistance.

Finally, here are some photos of the wear at the 1000 mile mark. These have been ridden on all kinds of surfaces: roads, pot-holed roads in industrial estates, fine sandy gravel on hard surfaces, fine sandy gravel on wet mushy surfaces, mud, grass, coarse gravel, and all the way up to more rocky surfaces (basically ballast from the old railway line being exposed as the “new” surface over it erodes). The tyre feels great on all of them. 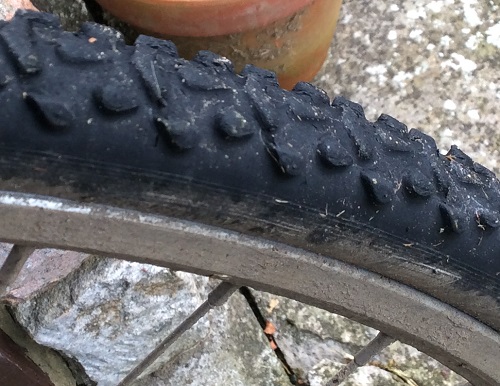 As per usual the rear bears the brunt and the knobbles have worn down a fair bit, at least in the centre. As mentioned earlier I suspect 2000 miles will be the limit, maybe a touch more, which isn’t too bad as that’ll probably work out as a new tyre every quarter. Apart from the general wear though the tyre has otherwise held up remarkably well. 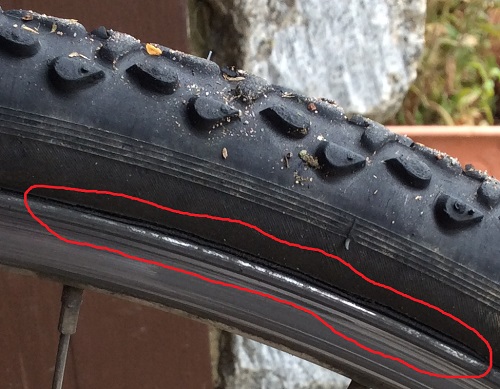 The front is wearing much more slowly. The only strange thing that happened is the split/crack you can see here. This is also the location where the pin prick hole appeared in the first inner tube (so far though, touch wood, no repeat issues with the better replacement inner tube). I don’t understand what has happened. If this was just down to under-inflation I would expect to see worse on the rear (which did actually pinch flat). It looks too long to be a tear from a sharp stone (and if it was the tyres would be covered with them by now). Perhaps it is a slight manufacturing defect coupled with a bit of under-inflation? It hasn’t got any worse though over time, which is the good news.

[EDIT: 2014-10-15] At around the 1800 mile mark I’ve just had the first proper puncture in the rear (and the front!). I wasn’t surprised about the one on the rear as it is worn and the riding surface is shocking (and I was going like the clappers). Looks like a sharp stone tore a small hole. Annoyingly the pressure loss from the puncture then immediately caused me to pinch flat as well so has made a bit of a mess of that inner tube. The front I was surprised about as it still looks in ok condition, must have been a slower puncture as I just discovered it was flat in the morning. A small piece of sharp flint was embedded in one of the knobs of the tyre. This is the same kind of puncture I’d get on road tyres and probably just bad luck. However, it has made me re-think tyre choice and also investigate whether tyre liners might be worthwhile; at the moment I’m thinking of trying to go for a £10 more expensive Vittoria cross tyre as they do have a puncture protection belt.

[EDIT: 2014-10-17] Four punctures in one week. I still think these tyres are good, I’ve just run them past their limit. I’d suggest looking to change these out at around the 1500 mile mark. I thought I might actually be able to run the rear down so that the knobs were completely worn in the middle (slick), but still had the corner knobs on, but it doesn’t work like that: Even though the knobs have not worn completely down the surrounding tyre structure has weakened meaning that it tears quite easily leading to immediate and easy punctures.